Seven of Henry's Children (with spouses) at Reed Reunion 1978 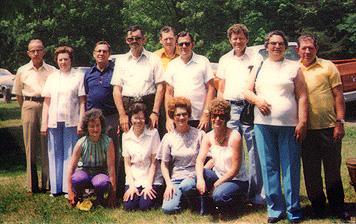 Each year the Reed Reunion is held in Rich Creek, Va on the first Saturday of August.
This picture of seven of Henry's children with their spouses was taken in 1978.

(Hugh's wife Edry is not present in this photo)

This photo is from the Reed Family

Back to Henry Reed Memorial